“The Lord is not slow in keeping his promise… Instead, he is patient with you, not wanting anyone to perish,
but everyone to come to repentance.” (2 Peter 3:9)

The reason Christ came from heaven to die for our sins on a cross was to make a way of salvation available for all who will repent and trust in Him. He doesn’t want anyone to perish, not even in the remotest parts of Africa. May we who know Christ allow His love to compel us to be involved in His Great Commission to reach lost souls with the Good News of Salvation.

THE CONGO (DRC): Formally Zaire, the Democratic Republic of Congo has a population of 90 million. French is the language, but Swahili is also spoken in the east and south. It has vast mineral resources, but corruption and frequent wars have made it a poor nation. Today, while hundreds of huge trucks drive on specially paved roads carrying minerals mined from the hills, some of it going to China, many live without electricity and medical services, and many roads are dirt. Thousands of Christians and hundreds of missionaries were martyred in the 1964 Simba Rebellion, and many others have died in conflicts until today. More than 5 million people have lost their lives through violence, war, starvation, and the virtual collapse of the health system. In 2006 the country had its first free elections, however rebel militias still operate in the east and tribal killings continue. Children under the age of 16 make up 50% of the population. Over one million have lost one or both their parents to AIDS. Life expectancy is 48 years.

The church, however, remains as the only structure to survive, and operates most hospitals, clinics and schools. Religious freedom from 1980 makes it possible to evangelize. Evangelicals have increased 10-fold. Missionaries are now highly respected. We are registered with the government as “Open Air Campaigners - Congo”.  Fred (Congolese), whom I trained, is our National Director/Evangelist, and we now have 2 branches with fulltime Congolese evangelists.

As I waited in the Atlanta airport with John Purser, a Delta Captain and our Board Chairman who was joining me for 5 days in the Congo, our 17-hour direct flight to Johannesburg was in trouble. It was overweight, and with the high fuel load, they needed 26 volunteers to take the flight the next day. Perhaps all our film equipment for OAC Congo had helped with the problem! Finally, after offering $1,500 and a hotel room, they got their 26. Unfortunately, we could not volunteer, as I was scheduled to preach in a large church after arriving in the Congo. 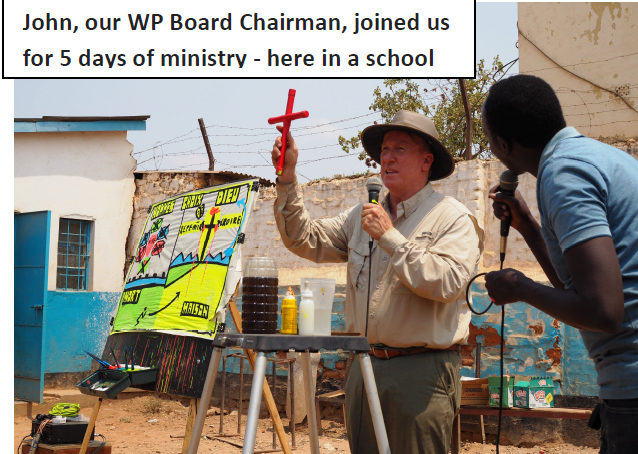 Arriving 2 days later in Lubumbashi, we were met by Fred. The next day began with no power or water, but it became joyful as I preached in the church and met precious believers (Photo 1). At night, the open air film meeting went well with all the new equipment working. The next day we drove in our Landcruiser to a town where a pastor of another large church had invited us to evangelize in his city (we always work through the local evangelical church). We met with the mayor, who  welcomed us and gave us an open door to the city.  Beginning with a school assembly, we saw the students listening intently to the gospel as they stood in the playground. That night, after an hour of announcing the JESUS film, hundreds came. 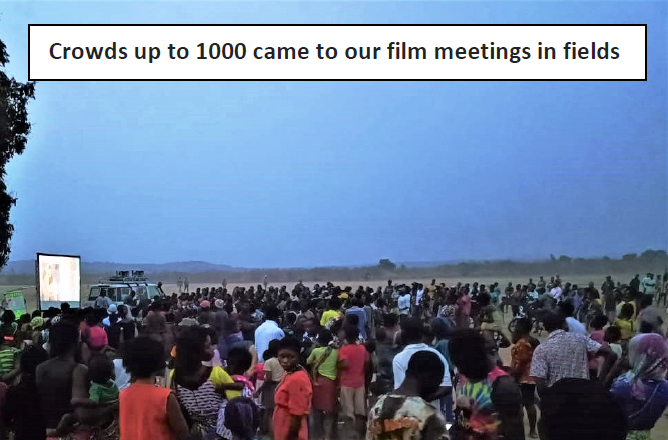 We always pause the film at the crucifixion to preach a salvation message. Fred translated me. The Lord was with us, and the majority prayed out loud to repent and trust Christ as Savior. 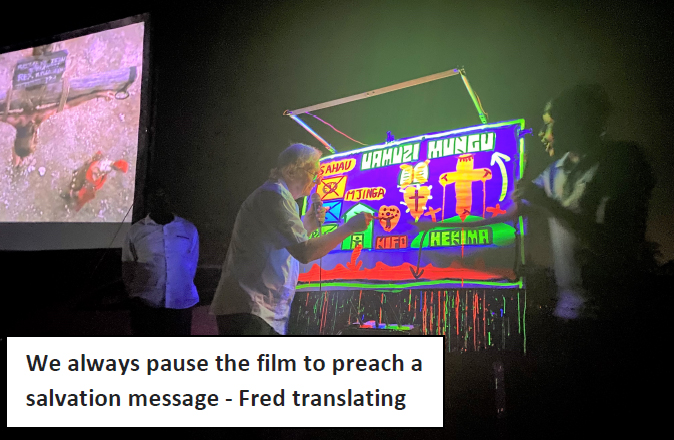 This would happen night after night in fields where crowds of up to 1000 would gather.  I found I could preach on Heaven and Hell, The Judgment, The Rich Fool, etc., and a quietness would fall over the audience. I always finished with the two ways, broad and  narrow, and called for them to choose. “Who wants to remain on the broad road that leads to hell?” No one. “Who wants to repent and trust Christ as Savior, and enter the narrow road to heaven?” A thunderous “YES”! Fred would then lead them in a prayer for salvation, and at the end, in African style, they would shout for joy. Of course, only God knows who were “born again”, but it was very obvious that the seed of the Gospel was falling on good ground. Fred was also happy to learn new messages. 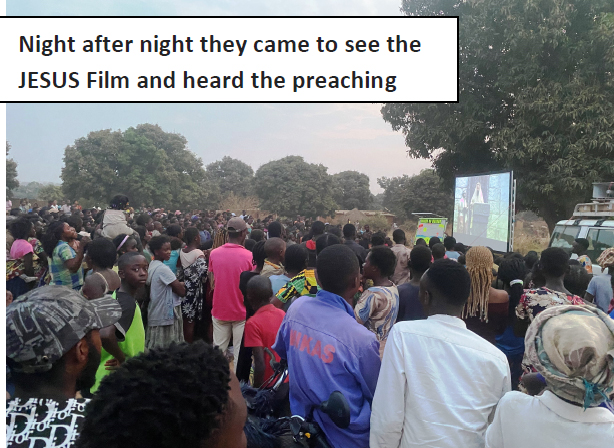 In both elementary and high schools, the response was the same. 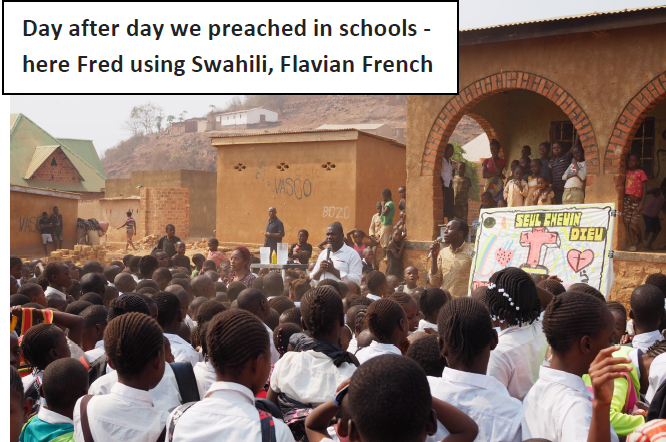 After preaching in the large church through which we were working, the pastor did something I have never seen before in a developing country. He was moved to give me the whole offering ($450)! Incredible! God used this to cover all our expenses (hotel, food, diesel, etc.). 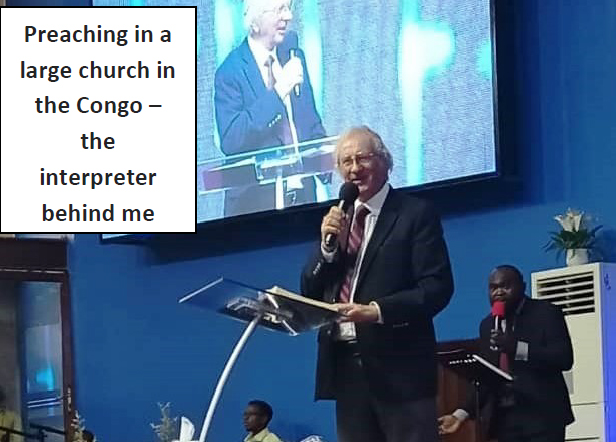 After asking the church team not to give out Gospel literature in our night meetings (I had seen it cause a stampede in Kenya), one night a church member decided to go ahead. Soon there was a big commotion in a cloud of dust as he was pushed down by hands grabbing for the booklets. Thankfully he survived. What a contrast to giving out tracts in Western countries! In schools, we leave literature with the teachers after our program. There were several attacks by the unseen “enemy,” but each day God brought glorious victory. One night the generator would not start, even after changing the spark plug. So, with a big crowd waiting, I prayed for God’s help. A few seconds later the generator roared into life. A person had changed the speed setting to high, making it impossible to start, but God overruled. Another time, the film had no sound. Finally, after trying everything, I wriggled the HDMI cable into the video projector and the sound burst forth… the crowd cheered. There are 3 English words that all know, from the children to the chief to the police… “Give me Money.” One chief said we had to wait 48 hours as he considered our request to do an open air meeting, even though we are a ministry of evangelism registered with the government. He was obviously waiting for money. We went ahead anyway, and a 1000 people attended. In another area the chief gladly gave us permission, but men in charge of security first wanted money. Fred called the chief, and when he drove up, they took off running.

As we returned to Lubumbashi, I was sad to leave this field that is so ripe for harvest. I’m always asked what food we ate. Mainly rice and Ugali (a root), but not everything, like what was offered for sale at our van window… a 1-foot-long, fat, dead rat. After a PCR Covid test necessary for leaving the Congo, I flew home the next day. Hurricane Ian had left no damage, thank God, but sadly homes were destroyed in south Florida. Entering my empty house with pictures of Elaine on the walls was not easy, but it is comforting to know that she is now experiencing fullness of joy in the presence of her God and Savior. I deeply thank God for every remembrance of her beautiful life, loving companionship and faithful ministry through 59 years of wonderful marriage. 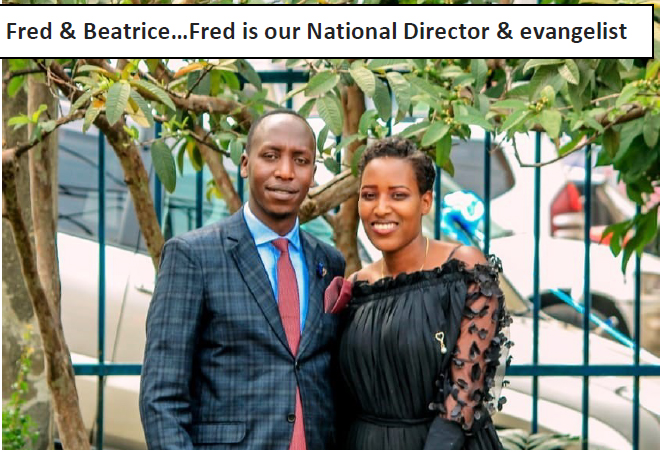 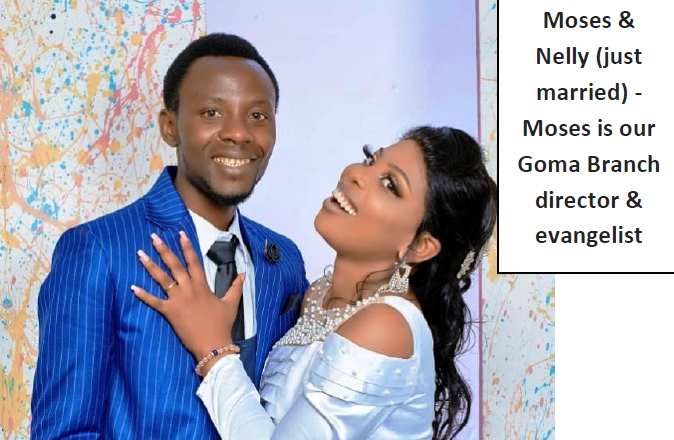 THANK YOU to our faithful supporters of this faith ministry. You make this ministry possible.

Donations can be made online by clicking here.

Compelled by His Love,